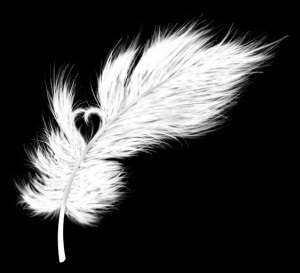 During the first world war, a marketing technique to get people to sign up for service, was to have young ideologically brainwashed women presenting men, not in uniform, with White Feathers to infuse them with shame. This was done in public so the shame was seen by everyone else too.

Men were frightened of actually going outside. To counter this agoraphobia, the government issued badges for those men who had done their active service, or who were home, injured, or were doing war work somewhere, so they would not be given “The Order of the White Feather”.

Shame was used as a tool to control soldiers too. There was no bigger shame than running away, and deserters were shot. Conditions of war were hell on earth. People broke under the stress. Those who went insane were considered weak – not courageous.

They and their families were shamed. This attitude left a whole generation deeply and irreparably damaged.

The marketing of war through shame technique is used by Tobacco Control in marketing their war on Tobacco. They are shame marketers. Sometimes what their White Feather Brigade does, is simply DISGUSTING! They are the ones who should be ashamed.

From “Oi – stop smoking, you” Taunton hospital gets kids to tell parents to stub out the fags”

It is a classic image that dates back to the earliest days of the NHS – lines of nervous fathers-to-be endlessly chain-smoking while their partners are in labour inside. But bosses at a Somerset hospital are so fed up with those soon-to-be dads – and even the women in labour – puffing away outside the door of the maternity unit that they have installed a special tannoy to shout at them to stub out their cigarettes.

The PA speaker system is being piloted at Musgrove Park Hospital and is specifically aimed at the entrance to the maternity unit, which nurses and midwives said was ‘a hotspot’ for the problem.
As well as smoking being banned inside the hospital buildings – as part of the smoking ban – smoking is prohibited across the entire Musgrove Park site, outside as well as indoors.

But try as they might to get the visitors, relatives and patients to stop smoking within yards of the doors, the Taunton hospital is still often surrounded by a fug of cigarette smoke – and the maternity unit is the worst place.

“Despite initiatives and campaigns encouraging people not to smoke on site, and to ask staff to approach smokers on site to remind them of this policy, the maternity unit remains a hotspot for patients and visitors smoking,” said a hospital spokesman.

Hayley Stone, who is the midwife with the special responsibility to get mums-to-be to give up the evil weed, came up with the idea of having a personal announcement system. It is operated by the receptionist to play out a pre-recorded Smoke Free message.

When a smoker is seen to be smoking outside the main entrance of the maternity unit, a receptionist can press a button to operate the PA device.For extra-powerful guilt trips, the messages telling them to stop smoking have been recorded by local schoolchildren.

“The idea for using children’s voices for the speaker system came about after hearing that posters using children’s’ artwork, encouraging no smoking, had been positively received when put up in public spaces, such as parks,” said Lucy Rexworthy, whose job is to get people to stop smoking across the whole hospital.

“After a lot of time with Hayley planning its implementation we are all thrilled that the PA speaker system is finally here; and I know that the receptionists in particular are really pleased to have this to encourage people to stop smoking outside of the maternity unit,” she added.

“The Smoke Free team are extremely grateful to all of the children involved in the project and to their parents who helped make it possible. It is hoped that the PA speaker system will have a good and positive impact on eliminating smoking at Musgrove Park Hospital,” she said.