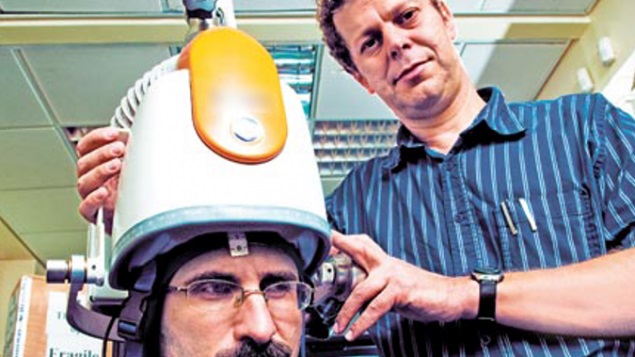 .
A machine that pulses deep regions of the brain with magnetic current may help heavy smokers quit the habit, an Israeli study shows.

In the study, which experts say is the most rigorous test of the technology to date, 44 percent of a group of heavy smokers who had failed to quit using other methods were finally able to stop after a few weeks of treatment. One third of the smokers who were treated had still not lit up six months later. It may not sound like a high success rate, but failure rates of other anti-smoking methods can reach about 90 percent.

The magnetic current method stimulates regions of the brain that are central to addiction, using a specially designed helmet. It’s is able to turn the brain regions’ electrical activity up or down – apparently making quitting easier.

“We appear to have changed the electrical activity of brain networks in ways that helped people to quit smoking,” said Prof. Abraham Zangen, a brain scientist at Ben-Gurion University of the Negev, who helped invent the machine and led the prospective double-blind cohort study. “Heavy smokers who failed previous attempts to stop smoking with medications, with nicotine patches, with psychotherapy – they made it.”

Based on the results of the study, published in the journal Biological Psychiatry in July, the US Food and Drug Administration is now testing the machine for approval.

A Jerusalem-based company called Brainsway hopes to bring the machine to market within a couple years. A similar Brainsway machine, with a helmet targeting different brain regions, is already being used to treat depression, and the company is testing other helmets for a range of other conditions, including autism and Alzheimer’s disease.
Rewiring the brain

Smoking is the leading cause of preventable death in developed countries. Tobacco use causes nearly 6 million deaths and half a trillion dollars of economic damage every year, the World Health Organization estimates. Even with the help of existing treatments, some two-thirds of smokers relapse within six months.

Zangen, who is a scientific advisor for Brainsway and has a financial interest in the company, worked with Dr. Yiftach Roth, a physicist and the chief scientist at Brainsway, for over a decade to build the machine to treat smoking. This is the first time it has been tested on human smokers.

The study’s 115 participants were Israelis who smoked at least 20 cigarettes a day and who had failed to quit with at least two other methods. Seventy-seven of them completed the study – sitting on the refrigerator-sized machine with the helmet on their head for 15 minutes a day several days a week for a few weeks.

Inside the helmet lies the key technology: a specialized copper coil that generates an electromagnetic field of exactly the right shape to stimulate the prefrontal and insular cortexes – centers of craving and behavior inhibition in the brain.

Called deep transcranial stimulation, or deep TMS, the technology is a deeper-penetrating version of standard TMS, which has been around for years but proved unable to deliver lasting results. Deep TMS coils can safely reach up to 4 centimeters into the brain, compared to standard TMS’s 1.5 centimeters – allowing the machine to target many more important brain regions.

A rendering of the inside of the helmet. (photo credit: Courtesy)

Based on previous research, Zangen and his co-researchers think deep TMS works on smokers by boosting networks of neurons in behavior inhibiting brain regions – strengthening the ability to resist the urge to smoke. The researchers suggest the pulses may also disrupt networks of neurons central to addictive craving while triggering the release of the neurotransmitter dopamine — which becomes scarce during withdrawal from tobacco and other addictive substances, making it harder to quit.

The most effective of the several treatments tested in the study involved high-frequency pulses while priming the participants by lighting a cigarette in front of them. This kind of cue has been shown to activate the target neural networks, which the researchers think makes them easier to alter.

The participants who got this treatment showed dramatic results: By the end of the testing, 83 percent of them cut their smoking at least in half, 44 percent quit smoking entirely, and 33 percent were still not smoking six months after the last test.

A control group was pulsed by a sham coil, which mimicked the tingling sensation and crackling sound of the real thing without effect. The controls got no smoking cue. The results were much less significant, with just 8 percent of controls quitting in the long term.

The participants’ reports on their smoking were confirmed with urine analysis. Some participants experienced minor headaches.

The FDA is conducting clinical trials on a version of the most effective treatment at some 20 clinics throughout the United States, Europe, and Israel. Brainsway expects the trials to be completed within two years and if they are successful, it plans to begin marketing and selling the machine immediately after receiving approval.

Prof. David Feifel, a clinical psychiatrist and neuroscientist at the University of California, San Diego, uses Brainsway’s already-FDA-approved machine for treating depression in his practice. He says deep TMS could revolutionize psychiatry – shifting the focus of treatment from chemical to electrical alteration of the brain.

“I think we’re seeing the beginning of the end of pharmacological psychiatry. TMS has advanced more in five years than medications have in 50,” said Feifel, who calls Zangen’s study the most impressive on the technology to date. “Now that we know what needs to be done, improving and expanding the treatment is mostly a technological question. It’s just going to keep getting better and better.”

A small study that Zangen recently co-authored finds a machine with a different coil may help treat depressive alcoholics. Zangen is leading a follow-up study on smokers, using electroencephalography, or EEG, to pinpoint how exactly the brain changes in response to the treatment.

the science reporter at The Times of Israel

The Inversion of Science, Justice and Common Sense

Propaganda – WHO Would Have Expected This?

Canada Eating disorders are a scourge in need of a strategy