News: The Pope Gets Marlboro Car 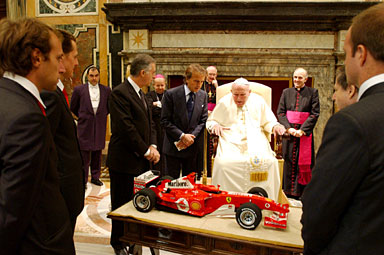 Seven-time world champion Michael Schumacher and fellow driver Rubens Barrichello wore dark suits but their ties were red – the racing colors of the Formula One team which has won six straight constructors’ titles.

“My compliments to you for the victory in the recent world championship,” the pope told them. “The Church considers sporting activity, practiced in full respect of the rules, a valid educational instrument for the younger generations.”

Ferrari chairman Luca Cordero di Montezemolo introduced the drivers and executives to the pope during the audience in the frescoed Clementina Hall of the Apostolic Palace.

Schumacher, Barrichello and general director Jean Todt were brought up for an additional greeting.

The pope stressed the importance of team spirit and said Ferrari owed its sports and industrial results to “an enthusiasm that comes from a community spirit”.

Schumacher, meeting later with reporters, called the audience “a very special” moment for the whole team. “It was very special to see his force and personality,” the German driver said.

Ferrari presented the pope with a model red racing car — a copy of the one driven by Schumacher in the last championship.

“That car is different than the other one,” papal spokesman Joaquin Navarro-Valls quoted the pope as saying after the audience, referring to the sports car the pope took a spin in during a 1988 visit to Ferrari headquarters.
http://www.startribune.com/stories/722/5190463.html

Ferrari for the Pope

Chairman Luca Cordero di Montezemolo and team boss Jean Todt presented the model car to the pope during a private audience at the Vatican.

The minature red Ferrari, one-fifth the size of a normal Formula 1 car, was briefly displayed at the Clementine Hall where the audience took place.
http://motoring.iafrica.com/newsbriefs/404281.htm

Ferrari team to meet the Pope

ROME: The Ferrari motor-racing team including drivers Rubens Barrichello and Michael Schumacher will have an audience with Pope John Paul II next Monday, the team said on Wednesday.

“This is a great honour for me, I have always dreamt of this,” Brazilian driver Barrichello said. 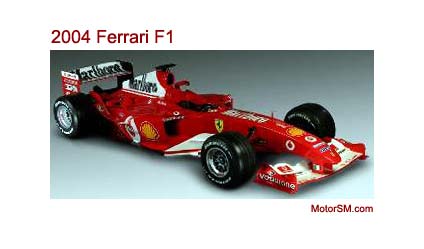 Attack on smoking gets papal blessing

The Vatican has signaled that it is considering adding its global influence to the campaign against smoking, in an article likely to send tremors of apprehension through the multi-billion-pound tobacco industry.
Read the article at: http://www.guardian.co.uk/smoking/Story/0,2763,1381253,00.html

Most Utahans Reject Ban on Smoking in Clubs

Get Involved or Contribute to Smokersclubinc – Join the Community of Smokers!

Health benefits of nicotine rise as laws clamp down